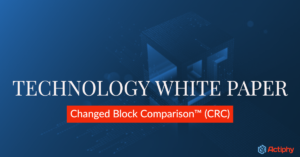 • Deleted and identically rewritten data are not identified as changes and are not included in an incremental backup.

• Clustered Shared Volume File System (CSVFS) incremental backup chains can be continued even if the primary or control node fails or changes.

Differences between tracking driver and CBC

Tracking drivers record the changed blocks by trapping write I/O to a volume. With this method, every write to the volume has to be monitored. This adds overhead to all I/O operations while a system is in use.

Actiphy’s CBC technology identifies changed blocks by comparing volumes’ previous and current states to determine incremental changes that need to be backed up and subsequently reduces the overall storage requirements for the incremental backup file.

Unlike device drivers, CBC doesn’t require a system restart upon completion of an install, update, or uninstall. This minimizes system downtime.